What is a CNC Swiss Screw Machine?

A Swiss screw machine is a type of automatic lathe with multiple tool holders arranged radially about the spindle, and a tailstock coaxial to it. It is designed for rapid production of small, high precision parts.

Screw machines are specialized automated metalworking lathes that were first developed in Switzerland during the late 1800s to produce large numbers of identical parts such as screws. At that time, the Swiss were leading makers of measuring instruments, including timepieces and weigh scales as well as tools, machines and optics, such as microscopes and telescopes. All of these required precision-made parts including shafts, bolts, screws and pins. Without a reliable machine to mass-produce these critical parts, many products would have been far too expensive to manufacture. What Makes a Swiss Screw Machine?

Note the features that make it special.

Benefits Over Other Milling Machines

Another appealing aspect of the Swiss Screw Machine is the fact that it can be programmed to cut within a tolerance of 0.0002 inches at a rate of 10,000 RPMs; a level not achievable with other CNC machines.

The turret on a lathe is a rotatable round vise that clamps around a round part such as a shaft, spins it on its own axis, or holds it motionless and allows a tool to come in from any angle around it to perform a machining operation on the held part. The turret holds it until the entire sequence of operations is performed, at which point the turret releases the part and it drops into the bottom of the machine. 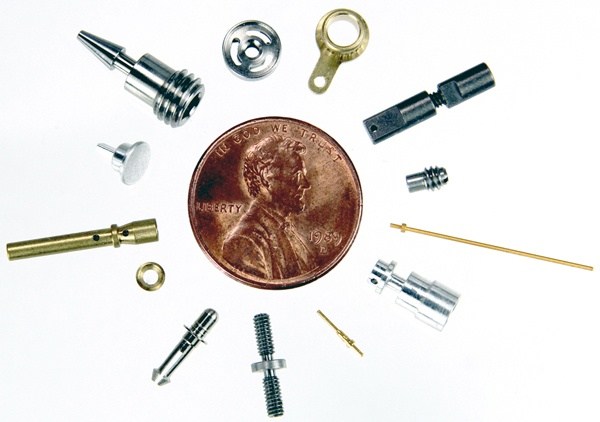 To make screws, the machine advances a length of steel rod into position, locks the turret, starts spinning, and introduces tooling to shape the head of the screw, another tool from the side to cut the threads, then from the front a disc to slice a screwdriver slot in the screw head, and finally a cut-off tool to cut the finished screw off the rod. The turret then releases the screw, advances the rod, locks the turret again and repeats the process to make another screw. Each screw takes about 10 seconds.

Once set up for a specific part, the screw machine can repeat the process quickly and precisely with little human intervention except to feed in lengths of stock. Originally the user programmed the operations mechanically with a series of cams, levers, indexing adjustments, fixturing and clamps. Each movement was precisely timed and the entire sequence set up on a master cam.

Most modern-day screw machines can be programmed from a personal computer and the program for a specific part downloaded to the screw machine’s own control computer over a network or phone line in seconds. Quality control measurements can be monitored automatically as the screw machine makes parts. What is it Used to Make?

There are a variety of applications that a Swiss Screw Machine can be utilized for, and one of the industries that depend on it the most is the automotive sector. The reason for this is because Swiss Screw Machine can produce a massive amount of parts at low costs, and this is especially important when auto manufacturers are pumping out thousands of vehicles per day.

The electronics industry also takes advantage of the ability of Swiss Screw Machines to create intricate parts. In the electronics sector, it is not uncommon to use a variety of different metals and materials, and it is a major benefit to these companies that the Swiss Screw Machine can accommodate both common and exotic materials; no matter the density of the material to be cut due to its high-speed cutting abilities.

While the Swiss Screw Machine may have been developed years ago in Switzerland for use in the watchmaking industry, it has since found its place in many different industries. A Swiss Screw Machine can cut extremely intricate designs in almost any material, making it a valuable piece of machinery. Combine this cutting ability with the aid of a computer program to control its movements, and the application possibilities are endless. It is for this reason that sectors, such as those in the automotive industry rely on Swiss Screw Machines for parts manufacturing. Also, the electronics industry uses the Swiss CNC Machine because it can be adapted to cut a wide array of materials, including plastic and metal. With all of the different application possibilities, there is no doubt that the Swiss Screw Machine will continue to play a vital role in the world.

Please submit your CNC/Swiss Screw requirements and one of our product specialists will contact you.